The Ballad of the Harp-Weaver

When illustrating a book I always need photographic reference of people to help me arrive at figure gestures. I had contacted Juilliard School of music to search for a female harpist. Through a series of contacts and my describing the poem I was contacted by a female harp student who was willing to model. I remember traveling to her apartment in Brooklyn and there she was able to play the harp and allow me to photograph. She had a three legged chair that became the chair in my illustrations. I worked with the harpist several times to photograph various figure gestures which ultimately became an important aspect of the book. ~Beth 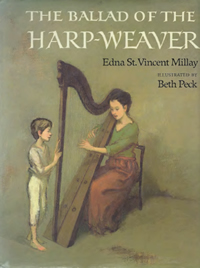 View Images From the Book

A picture book version of the Millay poem, in which a poor boy's mother worries about giving him food and clothing for the winter.

This haunting tragic fantasy--about a poor boy whose mother dies while weaving him "the clothes of a king's son,/Just my size," on a harp that "Nobody would take,/For song or pity's sake"'--was the title poem in Millay's Pulitzer-winning collection (1923). The current concern for poverty-trapped children makes the verse's powerful plea especially timely, with its dramatic appeal and mesmerizing rhythm--skillfully varied with an occasional heart stopping extra line. Peck's austere paintings are an appropriate visualization, setting the scene in a drab city with sober inhabitants but focusing on the two central figures in their bare tenement. The colors are somber, but the love between mother and son glows like the glints of color in the mother's miraculous last gift to her beloved child. An intelligent note about Millay's relationship with her own mother is included. (Poetry/Picture book. 5+)